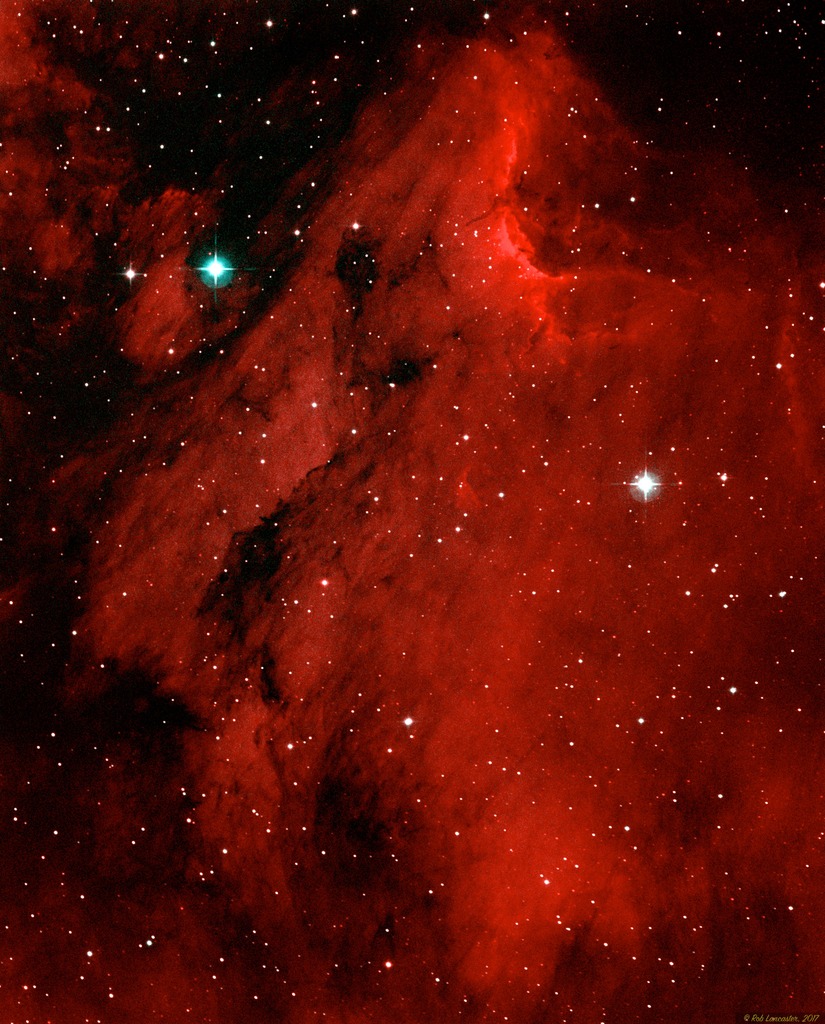 On July 19th, 2017, a friend and I had some fun doing astronomy experiments ;-). It was a beautiful night aside from intermittent clouds every now and then.  We carefully put the astronomy club’s scope in its box, we put my imaging rig on the club’s HDX mount and did some imaging of the Pelican Nebula to test out the mount.  The goal was to take some guided exposures using the mount since that has not been done yet and the club’s scope is not yet set up for that.  It was also because I wanted to do some imaging because the weather has not been too cooperative recently.  Also while that was going on, we conducted a seeing experiment around the observatory.

I had a couple of technical glitches to start.  Somehow my Moonlite focuser had gotten to the end of its tick count. This was odd because last time I used it, it was at about 20,000, but somehow it was at 65000.  It hasn’t done that before.  I may have to look into it.  But it was a simple solution of unlocking it and telling it to slew back to 20,000 counts and then locking it in again.  It usually remembers where it is, so that was odd.  Though it did work well the rest of the night.  Then my plate solves didn’t seem to be working, until I figured out that in fact I had not changed the aperture and focal length of the telescope in the software to match the equipment I was using.  Then the mount didn’t seem to be connecting properly, but then I realized I had failed to turn it back on after switching off the aux encoders.  And then I lost power to my equipment a little later because apparently my 12 Volt splitter wasn’t very good. I switched to powering the equipment with my battery.  Finally I sorted out these 4 issues and everything worked perfectly the rest of the night.  So we took 15 guided images at 5 minutes apiece of the Pelican nebula. It could have probably done 10 minute images with no problem, but I didn’t have enough time before the moon rose and before the Pelican got to the Meridian.

I took 9 Ha exposures  and 6 OIII exposures at 5 minutes apiece to create the image.  There were ZERO guiding issues.  This was very good news and was mainly was I was testing with that experiment last night.  Of course there was a possible issue with my focuser and there was definitely a problem with my 12V splitter, but that wasn’t what the experiment was supposed to test ;-)

While that experiment was running, my friend and I conducted the seeing experiment.  We dragged my dob to 3 different locations, the new domes location, the top of the hill, and the roof of the observatory and we tried to take exposures of the same stars in each location with the same focus.  Unfortunately, of the stars we picked, only Polaris was visible from all 3 locations. But I will send her the data and we can see how she would like to proceed.

Thank you very much to my friend for helping out!!!   I couldn’t have completed both experiments without his help.

Published: 03-22-2018 Hits: 270
Awesome week for Astrophotography
These last few days have really been phenomenal nights for Astrophotography!  I was set up in my own driveway on Wednesday night, I was at a friend's helping him with his setup on Thursday ...
Read more

Published: 03-22-2018 Hits: 236
Imaging the Pelican
On July 19th, 2017, a friend and I had some fun doing astronomy experiments ;-). It was a beautiful night aside from intermittent clouds every now and then.  We carefully put the ...
Read more