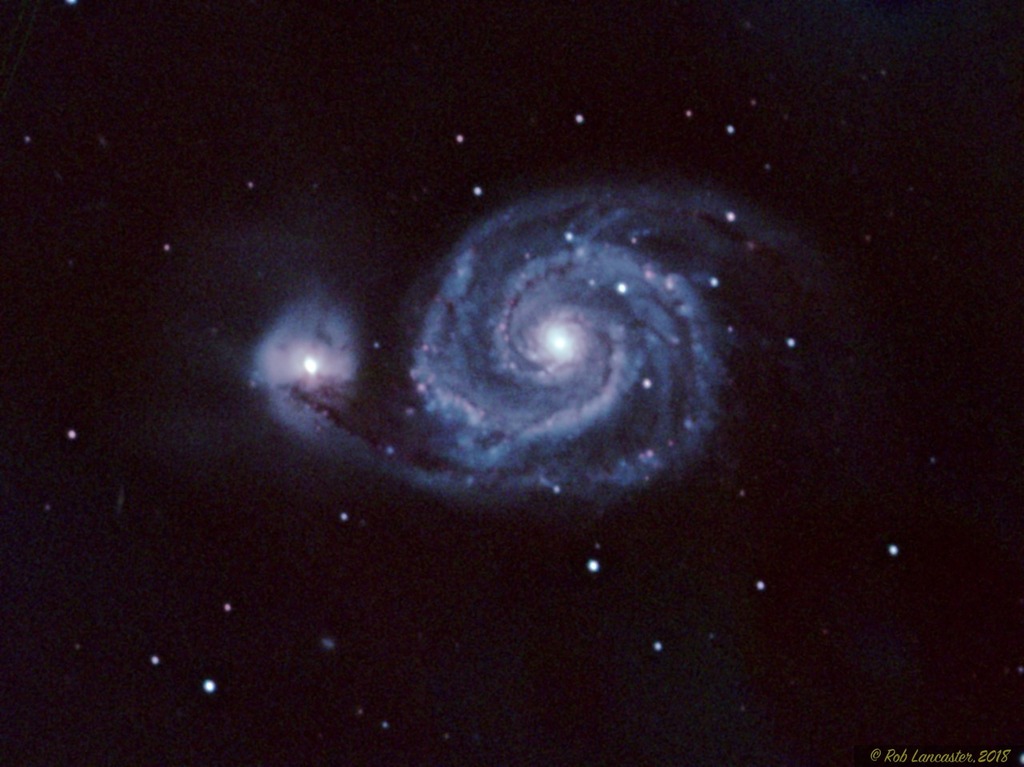 Since it is now Galaxy Season, I was thinking that it is a good time for me to switch back to my big scope, my homemade 10 inch f/6, to image galaxies.  I had not yet used the big telescope with KStars/INDI and the Raspberry Pi, so I thought it was a good time to try connecting everything on the big scope to see if I could get it all working.  Secondly, when I used to use the big scope with my setup, my guiding issues were not really worked out yet, so I had never got the best pictures due to guiding issues.  So I was eager to see if all the progress I made on guiding in the last couple of months could be applied to the big scope as well.  I also was ready to start using my new power supply box that I made two weeks ago.  So I decided to try it out because there were going to be not one but TWO good nights over the new moon on the weekend of March 16th and 17th 2018!

So, my first step on Friday after we got back from dinner, was that I stripped off all the important pieces from my 6 inch imaging rig.  Some of the velcro was tough to get off because it has been on there so long.  Then I put the pieces onto the big scope.  The focuser control box and the Dewbuster were a piece of cake to get on the big scope because they already had velcro on the scope from when I used to image with that one, but the Raspberry PI/USB Hub did not have a spot yet.  So I went to get some velcro from the basement.  Then I set up the rest of the equipment, connected everything, and quickly found out that the Velcro did not stick when I was plugging things into the USB Hub and the whole thing came off in my hand.  So I had to come up with a temporary solution.  I took a big ratcheting strap and strapped it on the scope for the evening.  I also found that the cord going from my scope to the raspberry pi for telescope control was a little bit short, but still reached it barely.  I will probably need to get a longer cord so that the cord doesn’t get ruined.  It worked for the night though.  Then I polar aligned the scope, collimated it, tried to balance it, and made sure everything was ready and went inside.  The balance was a little off due to the ratcheting strap weight all being on the one side, but it was close.  So then I started imaging.  At first, the wind was a bit high so my guiding and my imaging was not very good so I switched to 2x2 binning, but luckily after about an hour it calmed down and was decent the rest of the night so I could switch back to 1x1 binning.  After the initial issues with the wind, my guiding was pretty good for most of the night, in fact much better than it used to be before I got into using KStars and the Raspberry Pi.  My only other big issue after this point was that I accidentally ran the telescope into the mount twice because I had not changed the safety limits for the bigger scope.  But no damage was done, and I started right back up again.  I imaged about 12 galaxies that night and was very happy with the results, which I am attaching below.  I did not take enough time on each object to get color images because I was too eager to see the next one, but I did have enough images to stack.  I also should really do flats because the dust was pretty bad and my final result would probably be better if I wasn’t trying to cover up the dust.  But it was 5 am in the morning when I finished and I didn’t want to do it.

Then on Saturday night, I realized that yet again I could continue and get some more images.  The first thing I did was fix the velcro that I tried to use to attach the Raspberry PI onto the scope and take off the ratcheting strap.  Then I set up my scope and I set the limits like I should have done the first night.  After I was all set up, I was having some trouble with my scope connection cord, but I went outside and re-oriented it so it it wasn’t stretched so much and it gave me no trouble the rest of the night.  I really do need a longer cable for this telescope.  Without the big ratcheting strap, the balance was much better and the guiding was better as well.  In fact, my guiding Saturday night was about as good as I have been getting with the 6 inch recently, so I am very pleased!  I was getting way more detail in my 5 minute subs than I have ever gotten.  When I used to use my big telescope, I could never do more than 3 minutes without blurring, and often found that I had to do 2x2 binning.  But both of these nights I was able to do 5 minute exposures in 1x1 binning for all of both nights except for the first hour on Friday.  So this was very promising indeed.  So this night I focused on just doing two objects, the Whirlpool galaxy and the Cigar galaxy so that I could get enough data to do a whole set.  It worked very well.  My only regret was that I should have taken flats because again the dust on the optics was very bad, but I was tired since it was after 4 am and I didn’t do it.  Thus I had to sacrifice some of the fainter parts of the galaxies to cover up the dust.  If there were less light pollution as well, that would not be as big of a problem.  But my main goal was to image some galaxies and test guiding on the big scope.  It worked.  In the future I can image at dark sites, I can take flats, and maybe clean some of the dust off the optics so that the images are better.  But the main goal was achieved.

This first image is a stack of 8 Luminosity exposures of M100 and NGC 4312.  Each exposure was 5 minutes long. 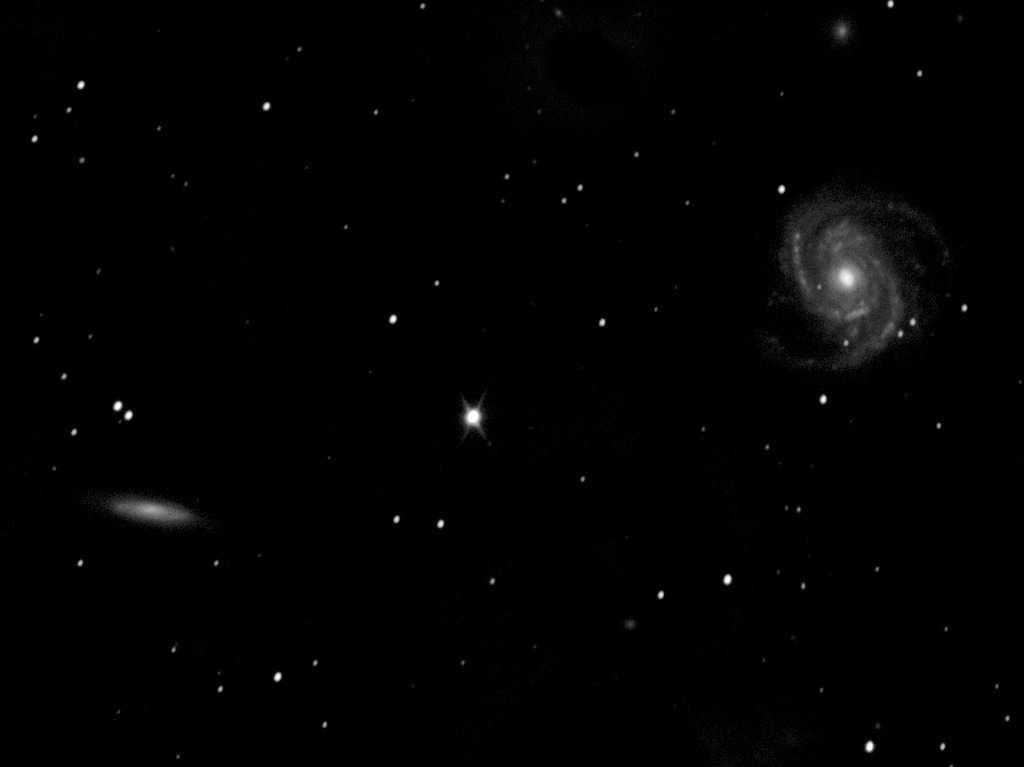 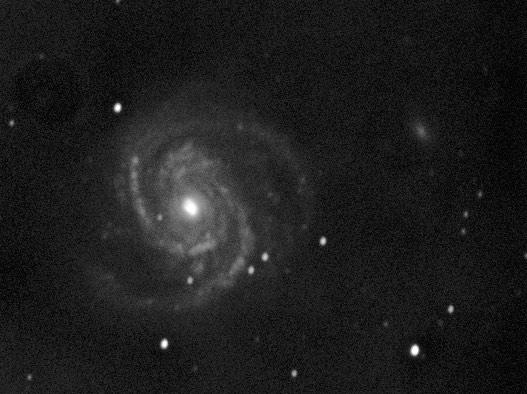 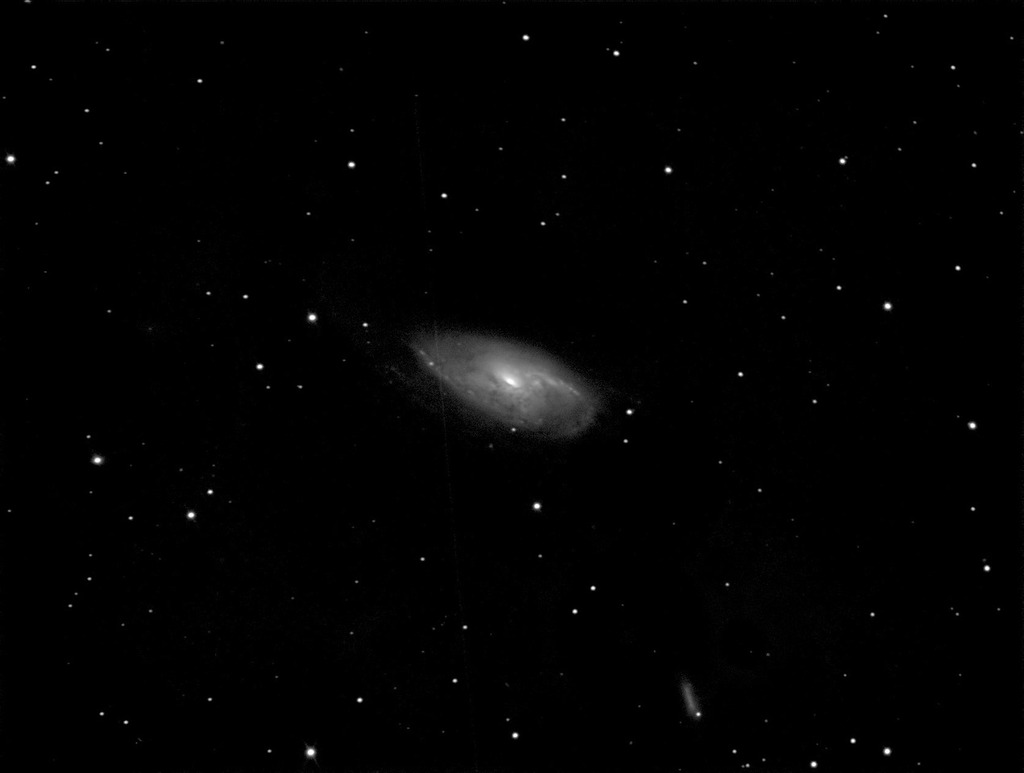 This is a closeup of just M106 with further processing.  Unfortunately, there appears to have been a meteor of satellite that went through it. 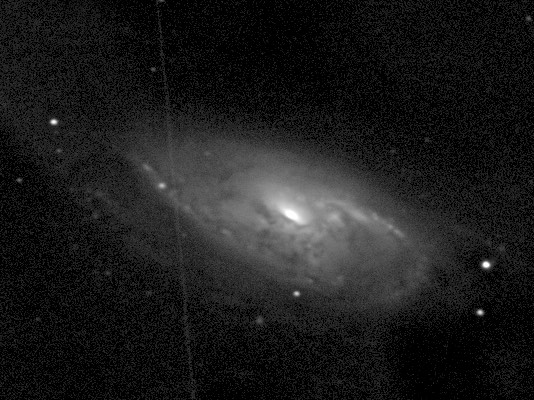 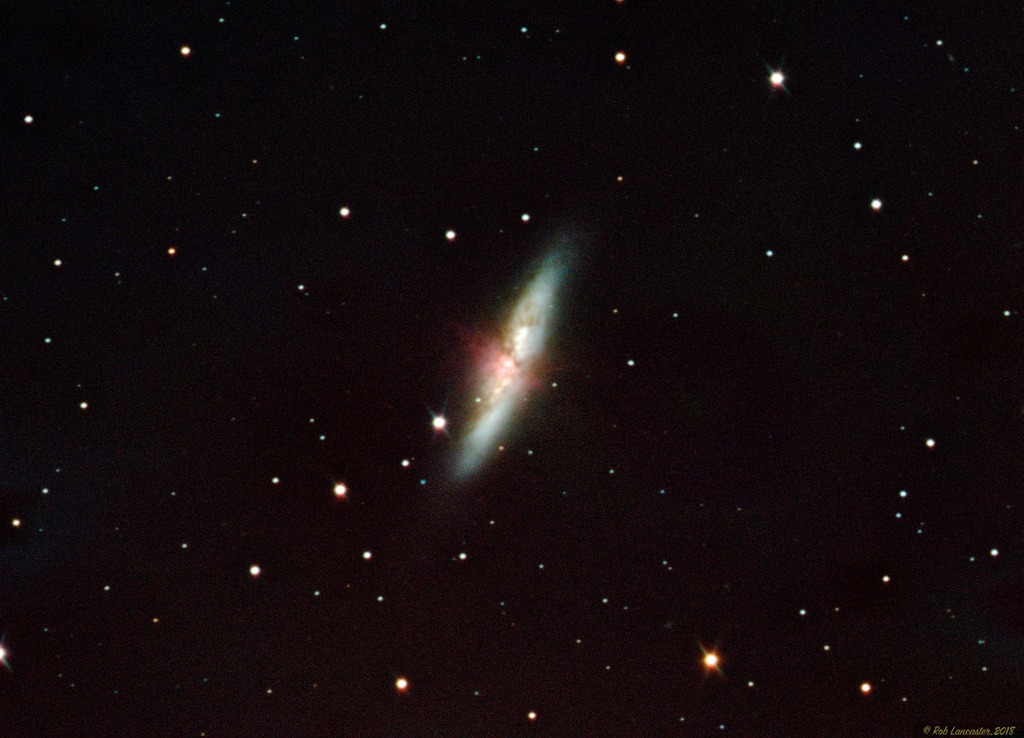 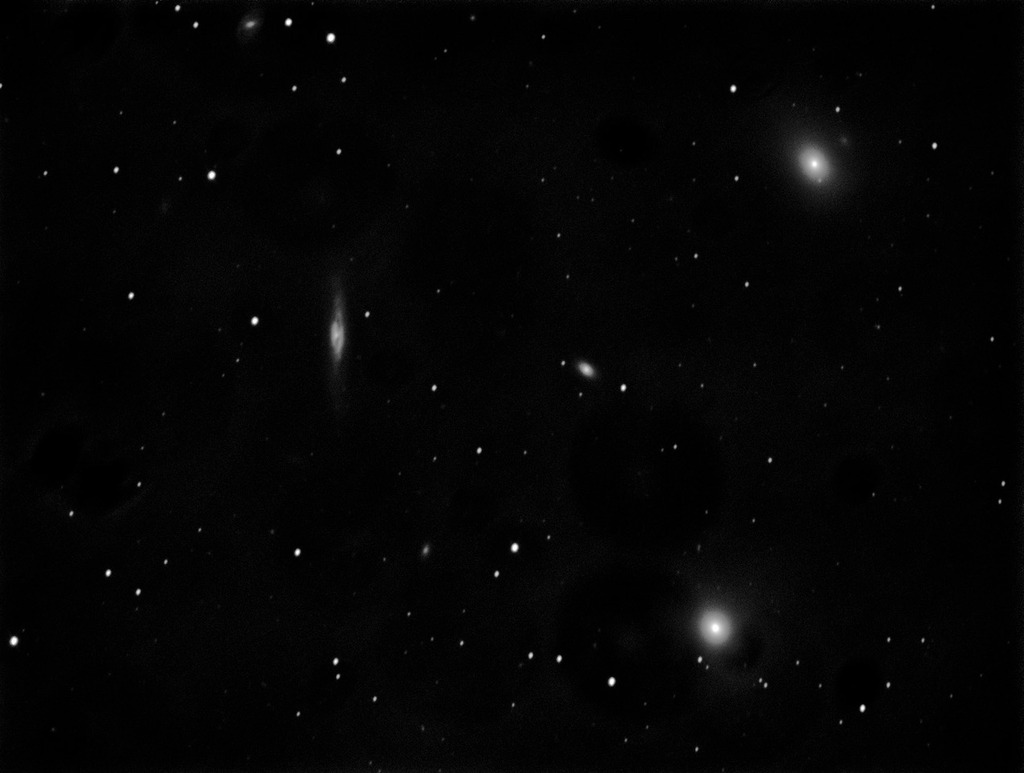